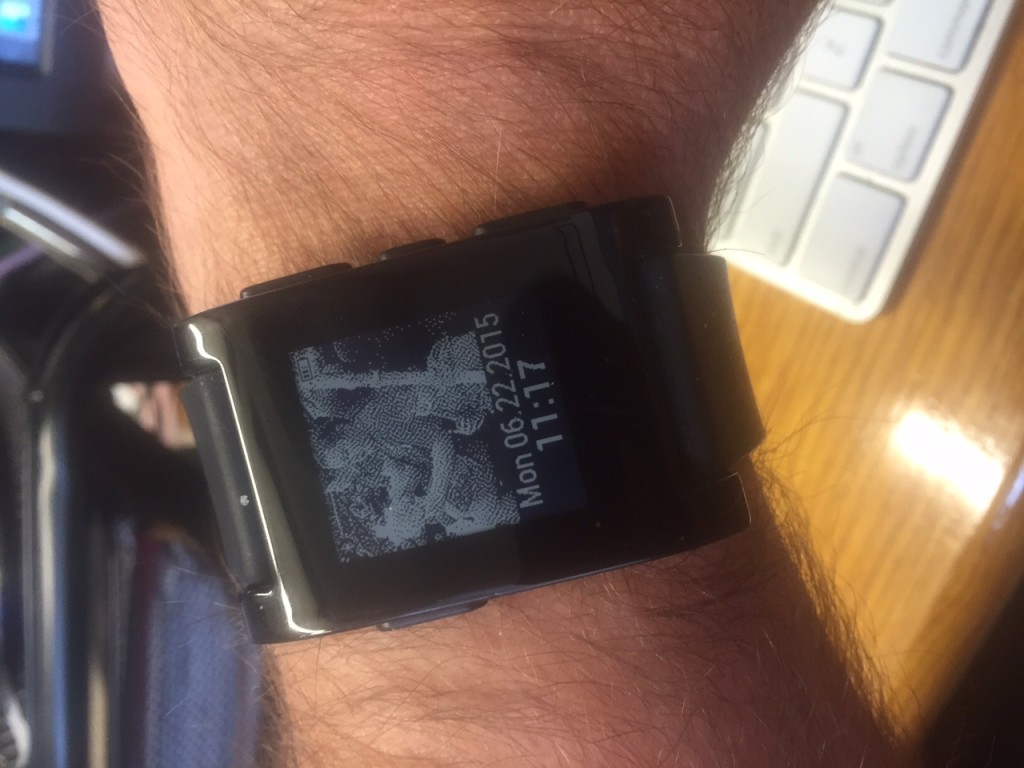 I haven’t worn a watch for almost a decade, possibly longer.

I quit wearing a watch when I discovered that the phone in my pocket worked great as a watch and I liked having my wrist free.

This all changed when my wife and I went to see a health expert and they suggested getting a wristband that tracked your steps, etc. The one they offered didn’t seem to be a great product. My wife had suggested we get the “Jarv” (which is a shitty product, but I’ll explain that later). and so we got a couple Jarv wristbands. In theory, a great product, it tracks your steps and sleep pattern, etc. and it also lets you know about e-mails, texts and other notifications from your phone.

I wore that for about a couple of weeks and then I looked into the Pebble watch, and decided I’d like that instead. I gave my Jarv to my daughter.

I got the Pebble and set it up, at first I was annoyed with it, it really takes someone who knows about technology to set it up. I didn’t have it charged at first when I was trying to set it up and it was failing to connect. My wife, who is not a techy person, said, why don’t you charge it first and then try to set it up. She was right, have patience, you fool.

I still discovered that some of the many apps that work on the Pebble watch are sort of glitchy. Yes, I used that term but it describes it best, most of the time, it works but sometimes it doesn’t.

The Pebble, in addition to telling me the time, Day of the week, month, etc, which most watches can do, it will tell me the temperature outside. I can also answer a phone call, get notifications from the apps on my phone and probably do a ton of other cool things.

You can even make a watchface yourself, which is something you currently can’t do with the much more expensive Apple Watch.

The Pebble watch works for about a good week without having to charge it. Plus it also prevents skin cancer (in a small area on your wrist).

I admit I don’t spend too much time looking at it, but I also noticed I spend even less time pulling out my iPhone and looking at it now as well. I think that’s a good thing.

Now, what makes the Jarv a shitty product, you ask. Well, mostly that it won’t charge. The design of the product places the charging port under the face of the watch and when you have your greasy wrist touching the contacts it builds up gunk that makes the contacts corrode. So after a few weeks or even days of wearing the product, you’re left with something that simply doesn’t work. I’m still waiting to hear from the company on what we should do. (I’ll update if I find out how to remedy this problem). I imagine the solution is to throw this piece of shit away and buy a better product.

I have a lot more to say about this watch but I’ll end here.